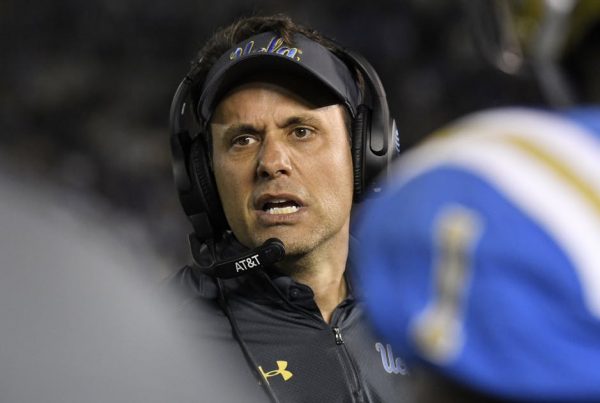 ATLANTA – Former Gophers offensive coordinator Jedd Fisch has reached the Super Bowl with a finely-tuned gameday job description that many a disgruntled NFL fan has begged his or her team to hire for as long as overloaded head coaching brains have been known to mismanage precious time at the end of halves.

Thanks to the well-documented youth and fresh-faced innovativeness of 33-year-old head coach Sean McVay, Fisch is the Los Angeles Rams’ “clock-management specialist.” And you can bet that if the Rams beat the Patriots by brilliantly maneuvering through their critical two-minute situations on Sunday, more teams will be looking for another Jedd Fisch to pair with the next McVay that’s now in vogue.

“Me being so heavily involved with the offense, this was a way of streamlining a process for whether you should challenge something, when you want to use your timeouts and how you handle situations that come up at the end of the half or the game, specifically in those last two minutes,” McVay said. “That’s when you need to rely on somebody. I’m not smart enough to be able to process all that. So, to be able to add somebody to lean on has been great.”

Fisch’s official title is “senior offensive consultant.” The 42-year-old with 19 years of coaching experience is a sounding board in many other ways for the similarly minded McVay. But the bulk of his time and effort is spent helping McVay prepare for “situational football” during the week and then executing the coaching aspect of it under the pressure and chaos of a ticking clock and a deafening crowd.

“I’m just another voice, another set of eyes up in the booth,” Fisch said. “This is the first head coach that I’ve worked for who also is the play-caller. So, because of that, I think Sean was like, ‘Jedd, one of the jobs you’re going to do is help me with situational football.’

“There isn’t a lot of talking on the headset, but it’s an open line of communication where I can say something if I think it helps.”

Fisch is a former all-state tennis player who never played football. Now he’s on the game’s biggest stage as the situational right-hand man of the league’s hottest young coach — a year after being fired at UCLA.

“It’s a pretty neat deal,” Fisch said. “Not playing football was a factor that I had to overcome a long time ago. But it’s been 19 years of being in good places.”

Fisch grew up in East Hanover Township in New Jersey. He went to the University of Florida because he wanted to one day join Steve Spurrier’s coaching staff, which he did as basically an undergrad gofer.

In 1997, he was a defensive coordinator at P.K. Yonge Developmental Research School in Gainesville, Fla. In 1998, he was receivers/quality control coach for the Arena Football League’s New Jersey Red Dogs. From 1999 to 2000, he was Spurrier’s graduate assistant.

“We kind of kept in touch over the years,” McVay said. “What we’re trying to do is get great coaches in our building. When we had the opportunity to try and bring him on board, you just find a way to create a role for him. He’s been a great addition.”

“I feel pretty blessed to have learned from so many great coaches,” Fisch said. “Including Sean.”

Fisch likes that McVay isn’t afraid to ask for help. McVay turns all things defense over to coordinator Wade Phillips. And, heck, he even has his own personal “get-back coach” — strength coach Ted Rath — whose only job on game day is to shadow McVay’s every step and pull him back when he drifts into the path of the sideline official.