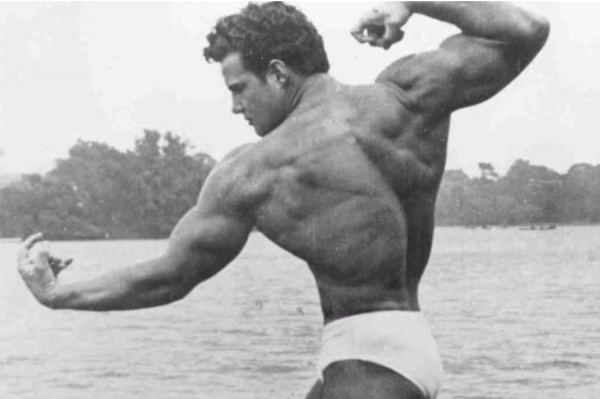 Arnold may be the GOAT, but you don’t have to look far down the list of bodybuilding legends before you get to Steve Reeves. Reeves not only won the 1947 Mr. America contest — at the time, the world’s biggest, most prestigious bodybuilding show — but also won the role of Hercules in the 1958 Italian film Hercules, which was later released in the US and earned Reeves international fame for his physique.

Reeves achieved his greatest bodybuilding feats in the pre-steroid era, but even today, many lifters consider his physique to be ideal — aesthetic, but not huge; flowing, not bulky. And if you look at the soaring popularity of the classic physique division, you could argue that Reeve’s stock is only going to go up.

Unsurprisingly, Reeves was no slouch in the gym. He paid close attention to his training, and, even today, many lifters could benefit from taking a note out of his book.

Now, I want to be upfront: these rules don’t come straight from Steve’s mouth. Instead, they come from one of Reeve’s training partners — John Grimek, a lifting legend in his own right. Grimek was a pretty prolific author, though, and he described Reeves’s gym habits in detail. You can check out the full article in the Iron Game History archives, but here are the highlights:

Reeves not only incorporated a lot of variety in his training — he even had special machines made to perform T-bar rows, seated rows, and curls from exactly the right angle for his body.

Now, I don’t recommend going overboard; you don’t need any special equipment to build a phenomenal physique. But you do need to be creative and think critically about your weak points and how to address them. For example, if you’re a strong presser, but your shoulders are lagging, consider incorporating more isolation work like lateral raises and Bradford presses in your training.

[Want to add creativity to your back day? Try incorporating the Reeve’s Deadlift!]

2. Train with high volume — but be progressive.

Progression is the single most-important ingredient for long-term success in the gym, no matter what your goals are. Each time Reeves walked into the York Barbell Club, he’d try to do a little more than he did the time before: more weight, more reps, or more exercises.

If you try to do that with heavy, compound exercises like squats, deadlifts, and bench presses, you’ll run into a wall pretty quickly. But remember: Reeves didn’t rely on those movements exclusively, and his only goal was to build an aesthetic physique, not to get as strong as possible (unlike his training partner, Grimek). When you’re focused on hypertrophy, the idea of progression is more nuanced then when you’re focused on strength:

Reeves also incorporated “intensifiers,” like drop sets and supersets, to both increase his volume and the difficulty of his training. Techniques like these are great because they make your training more efficient, more interesting, and sometimes, more effective. Why only sometimes? Because in order to get the most out of intensifiers, you’ve also got to follow Reeve’s third rule.

Nowadays, pretty much everyone goes straight to the smartphone between sets, but obviously, Reeves didn’t suffer from that distraction. In fact, he didn’t entertain any distractions during his lifting. He wouldn’t waste time chatting during his training — most of the time, he wouldn’t even sit down between sets, preferring to move straight to whatever movement came next in his routine.

Don’t get it twisted: rest is an important part of productive training, but focus is even more important. If you’re not fully invested in your training, you’re never going to get optimal results. That’s difficult, for sure, but it’s the only way that you can train with sufficient effort while still holding near-perfect technique. When it comes to bodybuilding, both are crucial. If you’re not pushing yourself to or near failure, your muscles won’t continue to grow; and if you’re not holding near-perfect technique, you’re not going to work the muscles you intend to work.

Is it really that simple? Well, no. Training is as much a science as an art, and while these three rules will improve anyone’s results in the gym, they probably won’t turn you into Reeves, either. Here’s why.

The Role of Genetics

There’s one last thing you should keep in mind if you’re trying to emulate Reeves: the man had one-in-a-million genetics. Now, I’m never one to play the genetics card when trying to explain someone’s success — I’ve just explained how Reeves worked damned hard in the gym, and earned every ounce of muscle he had.

But you could earn just as much muscle — in fact, a hell of a lot more — and still never possess a physique quite as impressive as Reeves’s was. To some degree, his shape and flow were gifts, and no other bodybuilder before or after has looked exactly the same. Don’t let that discourage you! Your look is unique, too, and as long as you remember the first rule (be creative), you can develop your own genetic gifts and create a truly astounding body that’s all your own.

Editor’s note: This article is an op-ed. The views expressed herein and in the video are the author’s and don’t necessarily reflect the views of BarBend. Claims, assertions, opinions, and quotes have been sourced exclusively by the author.