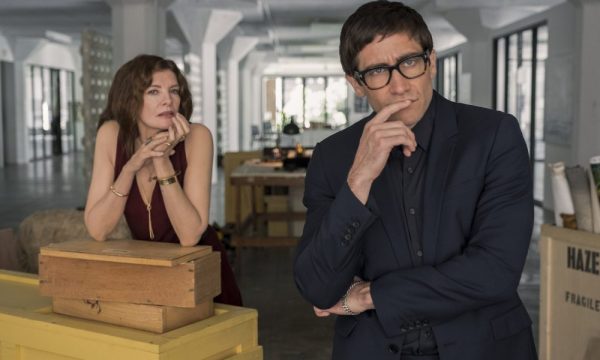 As a satire of the art world, Dan Gilroy’s Velvet Buzzsaw leans on the usual clichés about money and social currency taking priority over the work itself. The film exudes a slick, seen-it-all glibness that’s typical of self-pleased deconstructions of Los Angeles. In case we miss the point, a gallery owner, Rhodora Haze (Rene Russo), even directly tells critic Morf Vandewalt (Jake Gyllenhaal) that money is easier to discuss than art. She isn’t wrong, and there’s an interesting note of despair in her voice, but Gilroy doesn’t mine this emotional texture. In the end, there’s a sense that if the writer-director had skimped on the sitcom caricatures, Velvet Buzzsaw might have attained some of the ambiguity and stature of Nathaniel Kahn’s documentary The Price of Everything, which illuminated the fashions in which high-ticket sales both limit and feed our society’s very concept of art.

In Kahn’s film, dealers speak of mind-bogglingly lucrative art sales with an undisguised rapture that mirrors how aesthetes see actual art. These dealers don’t appear to be entirely motivated by greed, but by a thrill of the hunt. They find legitimate catharsis in a capitalist model, which complements a universal desire to consume the right things: food, clothes, and art that flatters our sense of political awareness, fashion, and erudition. Who’s to say that a more naïve appreciation of art is any purer, any less sullied by a variety of internal interests and societal influences? Such nuances are scantly present in Velvet Buzzsaw, as Gilroy evinces no interest in the interior lives of his coterie of gallery owners, freelancers, and hangers-on.

Gilroy’s satire congratulates the viewer for getting the jokes before moving on to the next easy target—committing the sort of insidiously superficial ego massage that the film is theoretically parodying. In this sense, Velvet Buzzsaw is reminiscent of Gilroy’s Nightcrawler, which offered a predigested critique of sensationalist media that felt weirdly quaint, at least 20 years behind the times. Still, as in Nightcrawler, certain performances here are sure to linger in the viewer’s mind: Russo informs her lines with a sad, suggestive snap; Toni Collette shrewdly calibrates her character’s meanness, giving it a sensual comic pulse; and John Malkovich, as a painter and recovering alcoholic, exudes a poignant ruefulness.

As a director, Gilroy cannily renders the neatness of his Nightcrawler and Velvet Buzzsaw scripts into a sleek fashion statement. Both films are hermetic and pared-down, with every line of dialogue hitting its (broad) target and moving the narrative forward, while the compositions are lean and precise. There isn’t a hair out of place in either film, and this directorial authority is impressive on one level even if it (deliberately) strangles the life out of the production in the process. With its silvery sheen and sexy lure of celebrity actors being naughty, Velvet Buzzsaw recalls the decadent, self-consciously chic art it parodies, and it also appears to be channeling the volcanic suppression of another Los Angeles horror story: David Cronenberg’s Maps to the Stars. Gilroy, though, lacks Cronenberg’s willingness to push a narrative to its breaking point, revealing fault lines of neurotic cruelty.

That said, Velvet Buzzsaw is a much better horror film than an art-world satire. When Josephina (Zawe Ashton), a struggling employee at Rhodora’s gallery, discovers abandoned paintings left behind by a deceased tenant, she unleashes a supernatural force that implicitly kills people for not believing in art for the right reasons, whatever those may be. The sort of naïf art that’s celebrated by the rich, these paintings offer chillingly pastoral depictions of insanity and isolation that seem to be on the brink of tipping over into murder, and they steer Velvet Buzzsaw into an unexpectedly strange realm.

In the film’s best sequence, a robot of a hobo, yet another rich artist’s act of unearned appropriation, becomes possessed and hunts Morf in a “revenge of the repressed” scenario that’s both ludicrously literal-minded and authentically uncanny. And another sequence, in which a privileged person is transformed into graffiti, is nearly as unsettling. Which is to say that Velvet Buzzsaw flirts with but doesn’t fully embrace the madness that powers John Carpenter’s In the Mouth of Madness. Gilroy’s craftsmanship has too mighty of a filter, as he’s too preoccupied with efficiently flattering the class guilt of his comfortable audiences.